Avocado (Persea americana) is a large tree in the Laurel family (Lauraceae) along with cinnamon, camphor and bay laurel. It originated in Central and South America and has a long history of cultivation. It is believed that Mesoamerican tribes first domesticated the tree over 5000 years ago.

The fruits have smooth, creamy texture and a nutty flavor. Depending on the cultivar, avocados have different moisture and oil content. Currently there are over 500 cultivars and over 200 are grown in Hawaii. They are often propagated through grafting to maintain certain fruit quality. Trees grow best in full sun and need good drainage to thrive.

The avocado exhibits a type of flowering behavior known as “synchronous dichogamy”, in which the timing of the male and female phases is distinct. The two flowering types are referred to as “A” and “B” flower types. Type A flowers open as female in the morning, close at midday, and reopen as male in the afternoon of the following day. Type B flowers open as female in the afternoon, close in the evening, and reopen the following morning as male. When the two flower types are grown together, this temporal overlap of male and female phase encourages cross-pollination and, thus, greater fruit production. 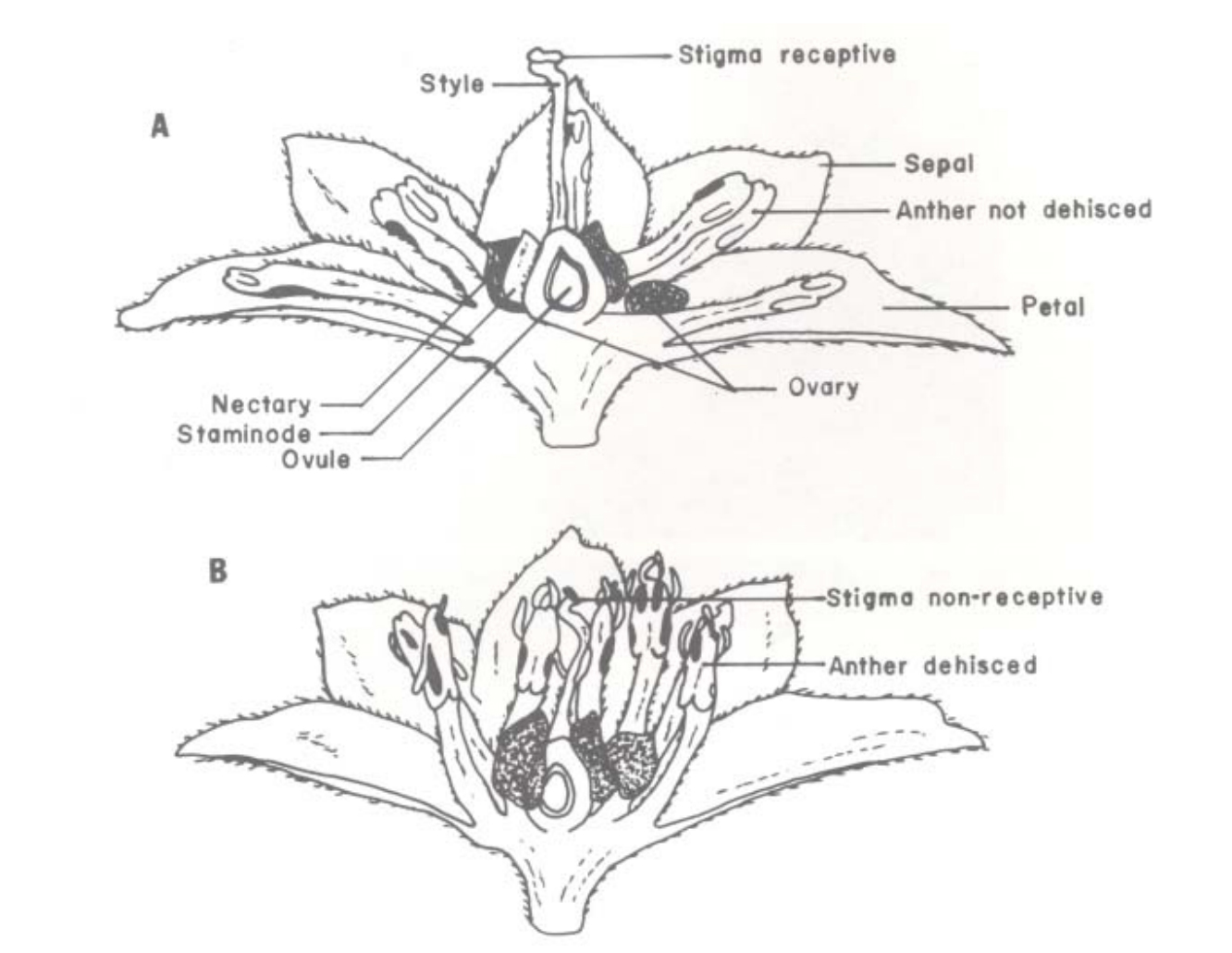 A diagram of the female (top) and male (bottom) phase flowers. Note: In the female phase petals and stamens are reflexed down. In the male phase the stamens are upright.
Diagram by University of Florida 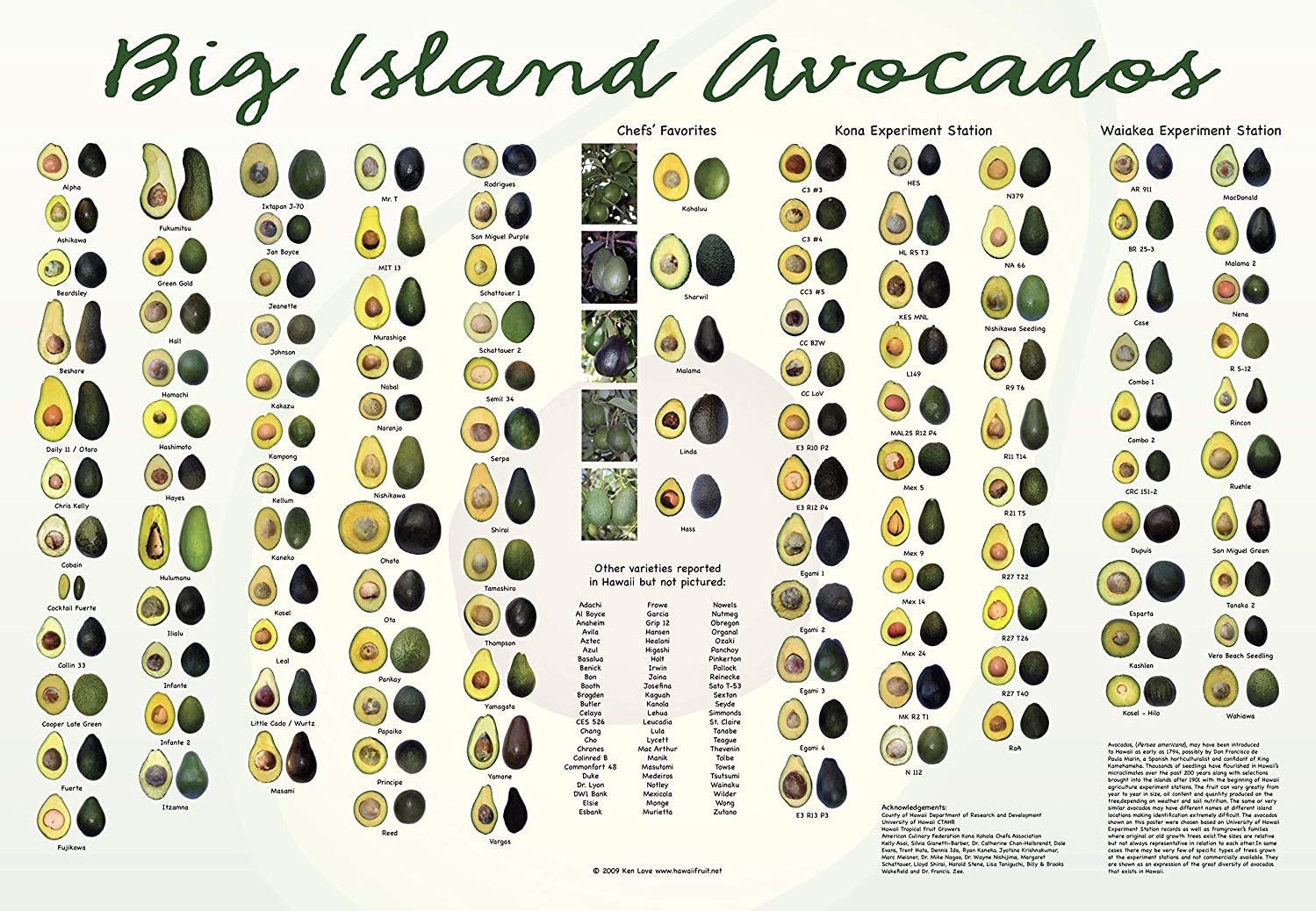 Murashige – Type B flowers. This cultivar is an abundant producer in late spring and early summer. The fruit is large and pear-shaped, it has a small seed and a dark green skin.

Malama – Type A flowers. An abundant producer in early fall, this cultivar has a purple skin that is easy to peel when ripe. Malama has a rich, nutty flavor and creamy texture.

Ota – Type B flowers. It has a long and abundant bearing season from late fall throughout the winter months. The fruit is round with a small seed and holds well on the tree.

Sharwill – Type B flowers. It has an abundant and consistent bearing season from October until March. The fruit is medium-sized with a green, rough-textured skin. Sharwill has a rich, yellow-green flesh with a high oil content and is the only variety allowed by the USDA to be shipped to other states.

Greengold – Type A flowers. Developed by the University of Hawaii, trees have an abundant bearing season between January and April. Fruits are pear-shaped with a rough, light-green skin and small seed. This cultivar has a high oil content.

Hass– Type A flowers. It is a medium-sized fruit with a dark green, bumpy skin. Haas avocados are popular in California. Grown in Hawaii, fruit can be harvested year-round with the main season between October and May.

Nishikawa– Type B flowers. Fruits ripen in winter months, mainly November and December. This cultivar is creamy and flavorful with a high oil content. Tree bears medium-sized fruit with an oval shape and green skin.

Linda – Type B flowers. Has an abundant and consistent bearing season in February and March as well as July through November. The fruit is large, round with a dark-purple skin when ripe. This cultivar is often referred to as “dieter’s avocado”, due to its lower oil content.

Yamagata – Type B flowers. Has a long and abundant bearing season from February to June. The fruit is large, pear-shaped with a small seed. This cultivar received the 2011 award for best tasting avocado in Kona’s Buyers Preference challenge.